Do you have a construction dispute but do not want to pay for an attorney? Find out more.

Do you have a construction dispute but do not want to pay for an attorney? Find out more.

Over 16 years of experience representing general contractors, custom homebuilders, remodelers, subcontractors, suppliers, engineers and architects in both California and Nevada.

I am also a regular guest lecturer for numerous organizations including California Professional Association of Specialty Contractors, San Luis Obispo Builders Exchange, and the Building Industry Association.  In addition, I regularly lobby in Sacramento for various issues affecting the construction community.

My cousin purchased Varden Brothers, the oldest roofing company in Albany, New York.  In my formative years, I was “shipped” to New York so that I could stay out of trouble and work in the family business.  This included hot mopping for my cousin’s roofing company. It was during these formative years that I knew I was “not interested” in working in the construction industry and went to law school.

Prior to starting my own law firm, I worked for a multi-state law firm in Las Vegas, Nevada representing national developers.  I litigated numerous construction cases on behalf of these developers.  This included a case that was appealed to the Nevada Supreme Court and became law –Shuette v. Beazer Homes Holding Corp. That case is still good law in Nevada law.

I returned to California where I worked for another large law firm that represented subcontractors prior to starting my own construction law firm.

Publications
Maquiladoras and Women Workers: the Marginalization of Women in Mexico as a Means to Economic Development Vol. 4 No. 1, Southwestern Law and Trade in the Americas 1999

Please contact us below and let’s talk about how we can be of best help for you and your situation. 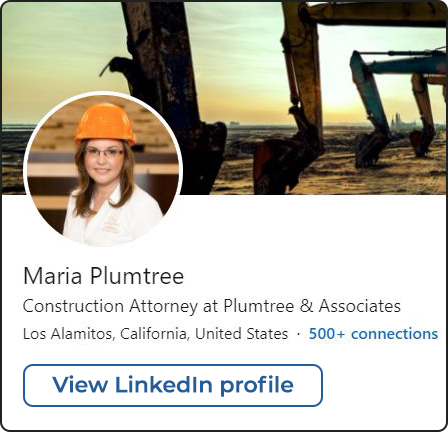